A Brief History of the 4th Virginia Volunteer Infantry 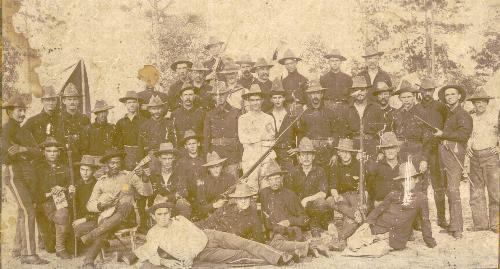 The Fourth Virginia Volunteer Infantry was mustered into service between May 9 and May 25, 1898, at Richmond, Virginia. Initially, the unit consisted of 954 men and 44 officers, but the unit swelled to eventually consist of 1,588 men and 57 officers. By October, 1898, the unit was stationed at Jacksonville, Florida's "Camp Cuba Libre," serving as part of the Department of the Gulf. On December 19, 1898, nine days after the war officially ended with the signing of the Treaty of Paris, the unit steamed for Cuba to serve as part of the occupation forces. The 4th Virginia arrived at the island two days later. The Fourth Virginia served in Cuba until the following March, encamped near Havana at "Camp Columbia."The regiment left Cuba on March 27, 1899, arriving in the U.S. two days later. It was mustered of service in April, 1899.

During its term of service had thirty men die of disease, 63 men discharged on disability and had 22 men desert. 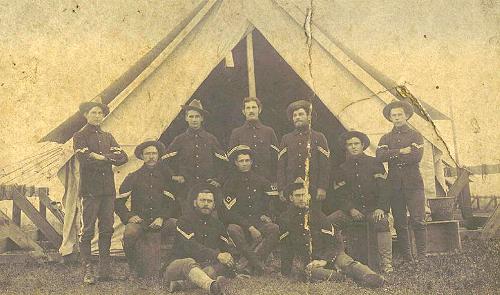 Some of the corporals of the 4th Virginia Volunteer Infantry at Camp Columbia, Havana, Cuba in 1899.

Bull, Tommy, images of the 4th Virginia at Jacksonville and Havana.

Clerk of Joint Comittee on Printing, The Abridgement of Message from the President of the United States to the Two Houses of Congress, (Washington: Government Printing Office, 1899). Vol. 3, p 494.

Statistical Exhibit of Strength of Volunteer Forces Called into Service During the War with Spain; with Losses from All Causes. (Washington: Government Printing Office, 1899).

Support this Site by Visiting the Website Store! (help us defray costs!) We are providing the following service for our readers. If you are interested in books, videos, CD's etc. related to the Spanish American War, simply type in "Spanish American War" as the keyword and click on "go" to get a list of titles available through Amazon.com.