This is a rare view of the installation of OLYMPIA's protective deck during her construction. The angled shape toward the side of the ship with the flat central portion can be plainly seen.

The only "armor" on the OLYMPIA (in addition to her turrets and conning tower) is her "protective deck." It is this deck which is the indicator of her class of ships - "protected cruiser." The protective deck was a layer of armor, below the level of the torpedo deck, which was intended to protect the ship's vitals - her engines, boilers, dynamos and magazines.

The construction of the protective deck is plainly visible from below. The deck began below the waterline on one side of the ship, angled up to the level of the torpedo deck floor where it became level and formed this deck. As it approached the hull on the opposite side, it again angled down to to below the waterline. 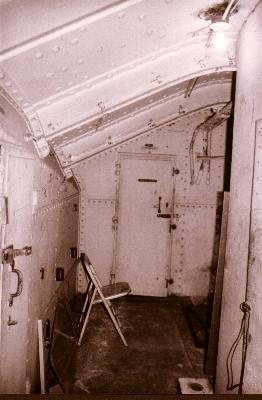 In this image, the protective deck can be seen overhead. This image was taken at the point that the deck begins to angle down to below the waterline.

The center, horizontal portion of the deck is two inches thick, and on the slopes, where the deck proceeds down at an angle toward the outer hull to a point below the waterline, it is four and three-quarters inches thick. It is supported by intermediate bulb tee frames following the contour of the deck transversely through the vessel and spaced at approximately four foot intervals.

The OLYMPIA is one of only three protected cruisers in existence today, the others being slightly more modern - Russia's AURORA (click here for a link to its website) and Japan's MIKASA.

Return to the Torpedo Room Page

Proceed to the Cofferdam and Wing Passage Page

To visit the website bibliography, click here. To visit the website video bibliography, click here Support this Site by Visiting the Website Store! (help us defray costs!) We are providing the following service for our readers. If you are interested in books, videos, CD's etc. related to the Spanish American War, simply type in "Spanish American War" (or whatever you are interested in) as the keyword and click on "go" to get a list of titles available through Amazon.com.