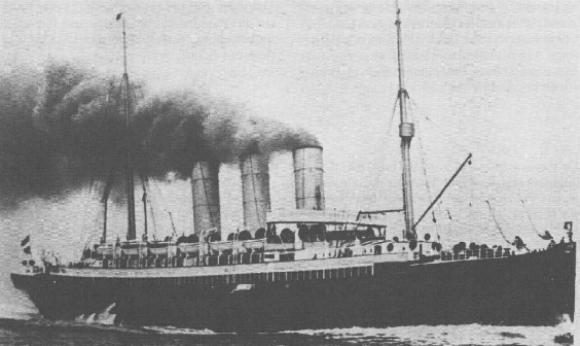 
During the Spanish American War, Spain had only three ocean liners that were used as auxiliary cruisers. They were the RAPIDO, PATRIOTA and METEORO. None of these vessels saw action, however.

The Spanish Government remembered the successes of the Confederate commerce raider ALABAMA during the American Civil War, and, subsequently planned to arm some steamers and liners into auxiliary cruisers for action against American lines of supply and communication

Early in the Cuban Insurrection, to contain the United States, Spain planned convert about ten vessels into auxiliary cruisers. However, the main need at the time was for transports to carry Spanish troops to Cuba. Most of the intended auxiliary cruisers were altered to serve as transports instead.

Therefore, when the War began, Spain had about ten armored steamers. The vessels became part of Gruppo E of the Reserve Squadron. Though intended for action against American lines of communication, most of these vessels were used as blockade runners.

The PATRIOTA was built in 1890 at Glasgow as the Hamburg America Lines vessel NORMANNA. She went on her first cruise on May 22, 1890, serving on the route between Hamburg, Germany to Southampton, England to New York, U.S. As a liner she could carry 420 first class passengers, 172 second class passengers and 722 third class passengers. The German government intended to use the vessel as an auxiliary cruiser in times of war. In October of 1895 NORMANNA took part in maneuvers with the German fleet.

On April 8, 1898 Spain purchased NORMANNA, converted her to an auxiliary cruiser and renamed her PATRIOTA. She was commissioned on April 20 as part of Admiral Camara's Reserve Squadron. She traveled with the squadron to Port Said, Egypt, where the efforts to reach the Philippines were abandoned.

After the war , PATRIOTA was used to transport Spanish troops in Cuba back to Metropolis, Spain. In 1901, PATRIOTA was sold to France and used as the liner L'AQUITAINE. She was scrapped 1906.