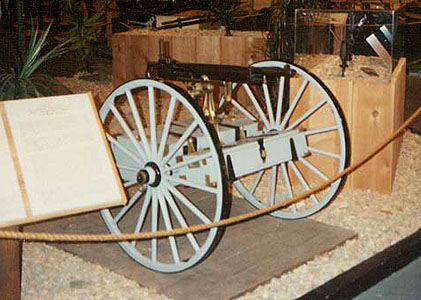 The Colt Automatic Machine Gun, Model 1895, saw use during the Spanish American War by the U.S. Navy and the 1st U.S. Volunteer Cavalry ("Rough Riders").

One of the the products of the genius of John Browning, the Colt 1895 was his first, albeit only modestly successful, foray into machine gun design. Rejected by the U.S. Army, which continued its successful use of the venerable .45 caliber rotating multi-barrel Gatling gun, several hundred Colt machine guns were purchased by the United States Navy in the same 6mm Lee caliber as its new Winchester-Lee Model 1895 straight pull action rifle. While the Lee rifle and its cartridge would only see service for a few years, the Colt, beginning with the Spanish American war, would continue in Navy/Marine service up to World War I. Although, primarily a Navy/Marine weapon, two privately purchased examples in 7x57mm Mauser caliber, the same cartridge used by the Spanish in their Model 1893 Mauser rifles, would be used by the 1st U.S. Volunteer Cavalry ("Rough Riders"), .

The First Marine Battalion was equipped with at least two Colt 1895's and emplaced these guns at Camp McCalla after their June 10, 1898 landing at Guantanamo. They were supplemented by two Colts from the TEXAS that were off-loaded and delivered on the mid-morning of June 12, by the TEXAS' own Marines. The TEXAS guns were mounted on wheeled light landing carriages which also carried along 1,920 rounds of ammunition in eight ammo boxes (each box contained two cloth belts of 120 rounds each), the guns were placed in the slit trenches and saw use in defending Camp McCalla against sporadic Spanish harrassing fire, one mounted on each side of the position. The TEXAS also possibly supplied the one tripod that it had in addition to the two light landing carriages. Not only did the Colt's provide supportive defensive fire at Camp McCalla, but three of the four weapons were operated by Company C in the battle of Cuzco Well on June 14th, and, according to the account of Pvt. John Clifford, of Company D, they were instrumental in repelling the initial Spanish advance and as a result may have saved the lives of several Marines that would have had to otherwise engage in close combat against a numerically superior force. Although at least one U.S. newspaper stated no machine guns were used in the engagement, a contemporary Spanish source confirms Clifford's account. This action alone validated the use of the machine gun in close combat.

A tripod mounted Colt also saw action in use by Naval and Marine personnel in the taking of Guánica, Puerto Rico.

The two 7mm Colts of the Rough Riders were also carried into action on tripods, eventually using captured Spanish ammunition. According to Roosevelt, the guns were only moderately successful, having some reliability problems and also being difficult to carry distances in the field without mule transport. Roosevelt indicated that he would have preferred the guns mounted on carriages but even this type of transport would have proven difficult for use in the jungle terrain in the type of offensive operations carried out in that campaign.

In addition to the ground use of the weapon, the Colt was also mounted on various warships and auxiliary warships in the conflict.

One could argue that the Colt's service in the Spanish American War, was, at best, modest, as compared to the use of the Gatling gun. However, the Colt did usher in the age of the machine gun in United States service (although the US Army never formally adopted the Colt it recognized the value of the machine gun) and pointed to a century in which the machine gun would quickly become a dominant arm in warfare. While this early Browning design would quickly be surpassed by more modern designs, several by Browning himself, it would still see continued manufacture by Colt and Marlin-Rockwell into the second decade of the 1900's. The Colt would see further combat service with US forces in the Phillipine-American War and the Boxer Rebellion. It fought with the Canadians in the Boer War. Some were purchased by the Mexican government it would see action during the Mexican Revolution. The weapon would be used in World War I the service of Canadians, Russians, Belgians, and the Italians on the ground, at sea, and in the air, its lighter weight giving it a certain versatility. A variant by Marlin (without the lever) would equip US planes and tanks near the end of that conflict.

The "Colt" featured a unique action of operation that proved to be relatively robust and durable if not completely reliable. Gas that bled from near the end of the barrel would operate an exposed lever which moved in an 180 degree arc downward then upward to open the action, and then moving forward in the same arc by spring pressure to chamber a cartridge. This lever action gave the weapon a relatively slow rate of fire (less than 400 rounds a minute) as compared to its main design competitor, the Maxim gun. However, the Colt was simpler, lighter, and easier to handle, all important considerations for naval service that would require a varied and flexible use of the weapon. The action also gave the gun its later nickname, "Potato Digger", as the lever, when the weapon was emplaced, would often kick up lose dirt. Although there are numerous combat reports of action stoppages, most of these were easily cured by cycling the action, but they did tend to slow down the already slow effective rate of fire. The slower rate of fire decreased the problem of the weapon from becoming overheated, a common problem with non-water cooled guns. The Colt was fired in bursts rather than in continual and extended firing that would become a well known trait of water cooled machine guns. Colt eventually developed a finned barrel (most commonly seen today in photographs that improved its cooling), but in the Spanish American War only the unfinned barrel was available.

The Colt machine guns used by the Rough Riders. The photo was taken in the Rough Rider camp in San Antonio, Texas, prior to their service in Cuba. The guns are mounted on their tripod mounts.

As a service to our readers, clicking on book titles listed in red will take the reader to the listing for the book on Amazon.com

Handbook of the Colt Automatic Machine Gun, Government Printing Office 1901 with revisions to 1917.